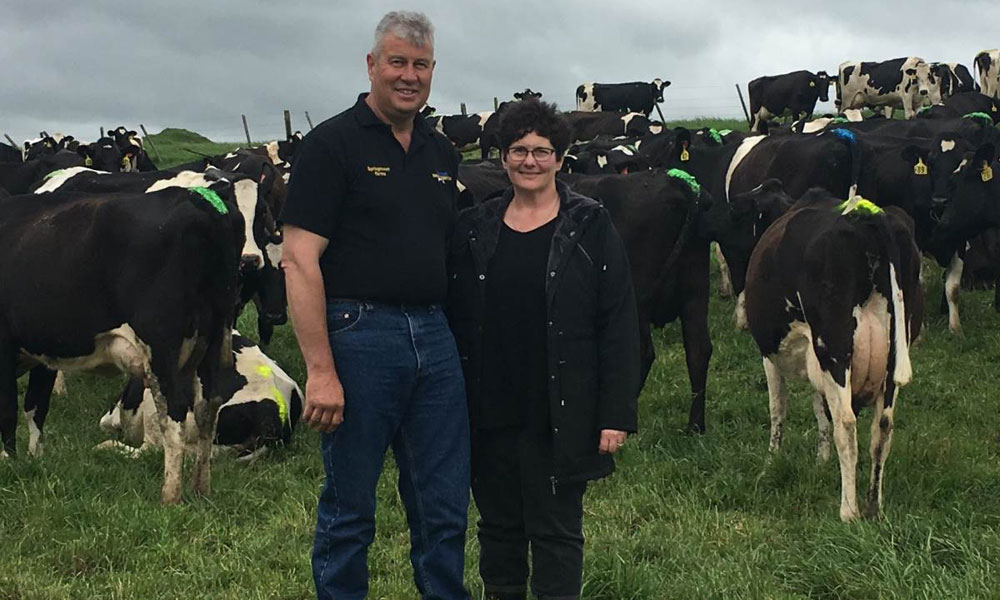 The Weirs were finalists in 2017’s Taranaki Ballance Farm Environment Awards and went on to win the LIC Dairy Award and the CB Norwood Distributors Ltd Agri-Business Management Award for the region.

“You show a group of people around your farm and they give you feedback about whether or not they think you’re heading on the right track. It’s not biased… just as they see it on the day,” says John.

“We would definitely encourage people to enter. You’ll be surprised what you end up with and what you get out of it. It’s well worthwhile.”

Springmount Farms is an intergenerational dairy business run by the Weirs on predominantly flat Central Taranaki land. The total area is 200ha and 520 cows were peak milked this season on the 150ha milking platform at Toko, east of Stratford.

The Weirs received a Century Farm award in Lawrence, Otago, in May 2017. Their family farm has grown gradually with every generation buying a neighbouring property. It is their aim to continue the family legacy and keep everything “together and in the family,” John says.

“We’re proud of what we’ve done over time. Our family has been here for so long.”

As first-time entrants, the Weirs had no expectations going into the awards but were rapt to win the targeted dairy farm award. They had attended the awards dinner the previous year as a guest of Ballance Agri-Nutrients, which was valuable preparation, then attended the supreme winner’s field day in 2017.

John says they enjoyed showcasing their farm to the judges.

“It’s interesting to get feedback from someone totally unconnected to your business,” John says.

He says the judging was a good process to go through.

“It was like a reverse interview and was interesting as we only had a short timeframe to tell them about the business.

The Weir’s dairy shed is a 58-bale rotary built in 1984 but modernised and fitted out by Dairymaster 13 years ago. The farm is System 4-5. Last season the production achieved from the mainly Friesian herd was 249,500kg milk solids. The Patea River runs along the back boundary of the farm and the Toko Stream is on the eastern boundary with all riparian areas fenced.

The business has three full-time and two permanent part-time staff, including dairy operations manager Carl Hooker, who has worked for the Weirs for six years.